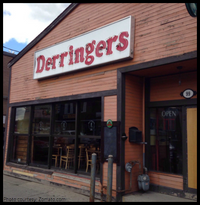 One of the defining moments in my life as an artist was becoming house musician at a pub called "Derringer's". A hole-in-the-wall in a "rough around the edges" part of town; exactly where I belonged, some might say. This was in the early 90s and, over the years there, I got to know the locals, the regulars and the staff pretty well and developed a crazy awesome following made up of university students and rugby players among other rowdy, fun loving types.

Since I was late for everything in life EXCEPT my music gigs, I actually got to know the daytime barkeep pretty well too. She'd usually be toward the tail end of her shift, waiting for her ride, when I walked in. The pub was smack dab downtown Vanier and so Debbie had to be a strong, take-no-bs lady to handle some of the would-be clientele. In stark contrast, she was always sweet and kind to this noob musician and we'd chat while she waited for her Bo to get off work and swoop by to bring her home.

Deb's Bo (at the time), Brian, was (and still is) a soft spoken, even keeled happy sort of fella and, in stark contrast to this story teller, normally very punctual. Well, save for one memorable occasion... but that's the back story for a song called "Fourteen Eighteen Wheelers" which will be the topic of a future post (and release).

The Brian I'm referring to here is none other than Brian Dubbeldam, well respected Stringed Instrument Specialist at, among others, the storied Ottawa Folklore Centre.

Every now and then, Deb and Brian donned their superpowers and became a musical duo with a repertoire of songs exclusively about trains. I can't recall exactly how they got wind I was a songwriter (I was pretty shy about it back in those days) but we somehow got on the topic after I slipped them a cassette tape and long story short, they incorporated Nowherebound Train into rotation! I thought that was pretty cool and I locked that memory away as "They played my song once at a festival, cool!"

Fast forward almost 30 years and I reach out to Brian for permission to name-drop (because... ya) and after exchanging pleasantries he informs me that Nowherebound Train was in regular rotation for their Europe Busking Tour! And so, thanks to them, one of my songs hopped the pond long before iTunes was an Apple in anyone's i... eye... er... you get the iDea.

Now, I've never heard their version of this song, though I'd love to! But as I re-recorded it this many decades later, I tried to think what a duet playing a full repertoire exclusively focused on trains might throw in. Since the old Train Whistle had already been done (see: "Vie & the Train Whistle") I figure the next best thing would be to make some of the background vocals emulate a passing train. So, mid way through each verse, the vocals swoon in softly, then louder and change pitch to (hopefully) give a visual that something was passing by.

A little nod to say thanks to Deb and Brian for supporting my writing and for giving me this great story to tell.