I wrote Nowherebound Train in 1992 and originally recorded and released it on cassette in 1993.

I had borrowed my friend Rick Watson's Fostex 4-Track recorder and cranked out 26 songs in one weekend from the comfort of my tiny basement apartment in Hull. My long time friends Johnny & Sylvie and my beautiful Goddaughter Cassie (whose sister, Jess, was not yet among us) lived on the top floor of that same building.

Vie (Sylvie) came down every now and then to sit in and listen as I tracked song after song. When it came to Nowherebound Train, by the time she popped in, all the music was done and I'd already laid one vocal track. Unbeknownst to her, at the end of that track I had added a light "Woo woo!" because... hey, why not? It was a train song after all, right?

So in walks Vie as I'm about to lay the final vocal track. She sits down, lights a smoke and since I've got headphones on, all she can hear is whatever I'm singing. No music, and certainly not the other vocal part.

But, being among my most dedicated fans, she knows the words and, once she's heard the last verse, she assumes I'm done recording.

That's precisely when, only in my headphones, I hear the "Woo woo!" and I send a high pitched "Woo woo!" back. But Vie thinks the song was done and I was just goofing around so she chimes in with her own...

I burst out laughing and Vie, never one to miss out on a good laugh, bursts out laughing also. In between belly laugh gasps, we trade off a few more train whistles before the final chord is hit and I press stop on the recorder.

Now, since she'd been sitting on the other side of the room, you can't hear her in the recording. So to someone who doesn't know the back story, it's 100% me possibly coming unhinged. But now you know it's just me reacting to Vie and, well... in my mind at least, it is epic. 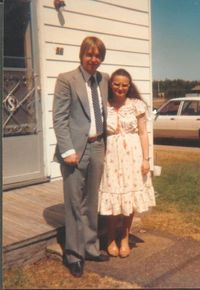 Sylvie sadly left us in 2016 so I wasn't able to relive that moment with her for this newer version. So instead, I've included a dreamy guitar bit at the end as a nod to this story and as a way to say to Vie: "Thanks for the wonderful memories sweet lady."

Note 1: To hear this goofy rendition off my 1993 Summer Solstice cassette, head on over to this link and fast forward to about the 2:45 mark: https://lucnormand.com/.../nowherebound-train-1993-original